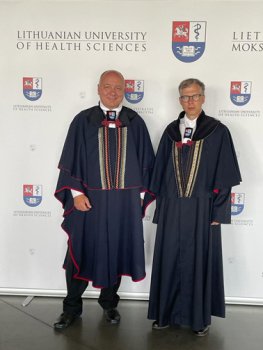 Prof. Dr. Stefan Schreiber, one of the directors of the IKMB, has been awarded an honorary doctorate from the Lithuanian University of Health Sciences. The award recognizes his more than 15 years of collaboration with the Department of Gastroenterology at Kaunas University Hospital, which has resulted in numerous joint discoveries. During this time, IKMB has employed many scientists from the University of Lithuania and has thus benefited greatly from this cooperation. The awarding of the honorary doctorate took place on the occasion of the 100th anniversary of the university during a graduates' farewell ceremony in front of 10,000 guests.