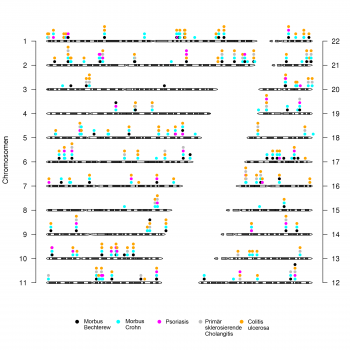 In collaboration with researchers from 26 different countries, David Ellinghaus and Andre Franke, both members of the Cluster of Excellence “Inflammation at Interfaces”, have identified variants in 169 genetic regions including 27 novel loci which increase the risk for inflammatory bowel disease, primary sclerosing cholangitis, psoriasis and ankylosing spondylitis. The results of the study conducted at the Institute of Clinical Molecular Biology (IKMB), Christian-Albrechts-University Kiel (CAU), and the University Medical Center Schleswig-Holstein (UKSH) have now been published in the journal Nature Genetics.

In their – so far worldwide largest - study, the researchers compared the DNA profiles of 52,000 patients with those of more than 34,000 healthy individuals, focusing particularly on those gene loci which are already known to play a role in particular inflammatory diseases. Conflicting an existing paradigm where a causal relationship between inflammatory bowel disease and comorbid diseases exists, the results of the current study rather support the presence of shared pathophysiological pathways as the basis for the clinical co-occurrence. The comorbidities among the five immune diseases were best explained by biological pleiotropy (the same gene affects multiple traits) rather than heterogeneity (a subgroup of cases genetically identical to those with another disease, possibly owing to diagnostic misclassification, molecular subtypes or excessive comorbidity). In particular, the strong comorbidity between primary sclerosing cholangitis and inflammatory bowel disease is likely the result of a unique disease, which is genetically distinct from classical inflammatory bowel disease phenotypes. Due to the complexity of disease risk profiles, it is assumed that various molecular aspects and mechanisms for the same risk genes are of relevance.